A day with the media 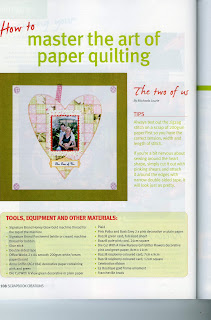 Yesterday I gave my first radio interview. I was rung by Fiona Wylie from ABC radio Port Macquarie – and to say I was surprised would be an understatement. The segment was on people who have interesting and out of the ordinary jobs – and I guess I do fall into that category. It was an interesting and nerve wracking experience being on the other side of the radio – as I listen to ABC Canberra almost the whole day while I am working. I hope it went well – the 10 minutes seemed to go by quickly and I before I knew it I was putting down the phone and there I was, sitting in silence again. Very strange. Talking about myself and what I do certainly made the day very out of the ordinary. My usual work pals, Pepper the wonder dog and my cats, Coco Channel and Prince Domino don’t have much to say about what I do.

I continued along the multi media path later by picking up the latest issue #64 of Scrapbook Creations which had just arrived at the newsagent. My project, “The Two of Us” – How to master the art of Paper Quilting appears on page 108. It details a scrapbook page showing a heart and photograph which is also a pocket containing another little heart with a pull tab. I’ll tell you now that the lovely French manicured nails which are shown punching squares and drawing – do not belong to me. I only wish. Maybe I should treat myself.

So the excitement continues. Never a dull moment at “Wren’s Nest Studio”.
Posted by Paper Quilt Creations at Thursday, March 05, 2009

Somewhere else to visit

Friends who drop by